The market was like the weather in New York yesterday; cold, damp, and dreary. That’s not the worst possible climate backdrop, but it’s great for napping, which is what we should have done as we waited for the first Presidential debate.

We witnessed a little spunk as the market avoided a full-blown swoon, which would have been the case a week ago under a similar weakness. There is no doubt that buyers are selective, but by the same token, understand they do not have to panic.

That being said, there could be some kind of stimulus deal ready to go this week. Everyone knows the latest $2.2 trillion offer from Democrats is a part of the messaging game, and it’s to waste time.

One of the motivating factors is the natural upturn in Covid-19 cases. These headlines are not only speed bumps for the stock market, but they also underscore the fact we are fighting a beast that will get stronger in the winter. We cannot surrender anymore because lockdowns create their own kind of death toll.

Hence, even cities like San Francisco are moving along with reopening plans.

Don’t get me wrong. After being shut down and then limited to no in-door dining, this is welcomed news. Yesterday, the American Dream Mega-Mall, which is not far from my home in New Jersey, also announced its reopening at 25% capacity.

The problem with limiting restaurants and bars and other business establishments to 25% capacity is there will still be extreme economic pain. Lawmakers need to wise up and do the right thing because the sooner they move, the less expensive it is for them.

If they wait and more businesses will close permanently (Disney (DIS) announced permanent layoffs of 28,000 workers at its parks, Experiences and Production division, citing limited capacity and restrictions in California and Florida). The next fiscal package will not be an economic push – it will be an economic rescue package.

Those two value sectors, Energy and Financials, looked horrible again as the former just sucks and the latter cannot get its act together. Remember when oil was king, and the smartest guys in the room all worked on Wall Street?

That was a long time ago.

The biggest winners were mostly up on company-specific news, although half of the top 10% gainers were in Technology - they were not the big mega names, which struggled to hold on to early gains.

There were substantially more decliners than advancers on the NYSE and the NASDAQ Composite, although new highs edged out new lows for both.

The internals are not pretty at all. Then again, market breadth has mattered less than the ‘up’ stocks, and whichever stocks were lower. The big growth names still get going, and the market gets going (even if most names are left behind).

We took 14% on tech ideas that were higher Beta than we usually feature in the Hotline Model Portfolio, so our cash position is back to 15%.

The debate was a chaotic mess and we didn’t get much on policy.  I think the format was a mistake where the candidates take a turn on accusations made during the others turn. A hard two minutes and need to race through a list against the reality that both candidates were going to speak to their own agendas.

Much is being made over the market’s reaction to the debate, but futures were not in free fall mode immediately after the debate and in fact held up well – the NASDAQ was even higher for along stretch.  It is true the debate will not ease any anxiety over a potentially messy outcome of an election where the results could drag and be questioned.

In addition, there isn’t much movement in other assets with bond yields ticking higher, precious metals lower and the dollar fractionally higher.

Disney (DIS) is a shot across the bow of California, which follows the conversation from hedge fund manager Jeff Gundlach late last week. States cannot keep people alive and keep economies alive by digging their heads in a hole. This news from California should jar mayors, governors, and world leaders everywhere.

Society must deal with the virus by not killing the economy which includes lives and dreams and the ability of people to sustain themselves. 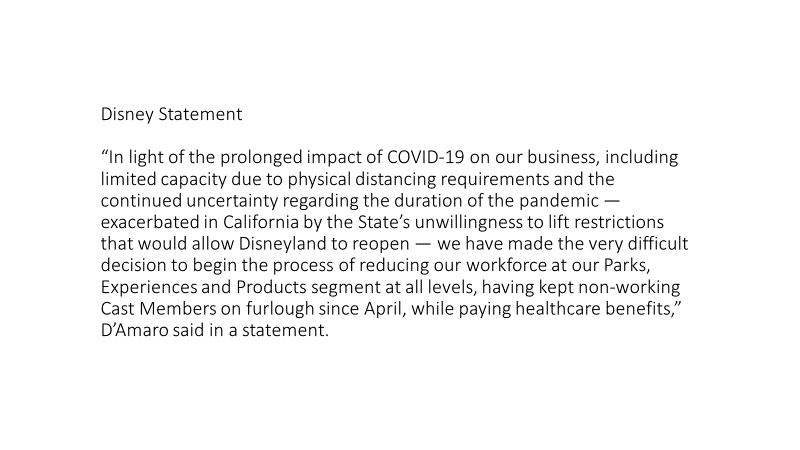 The biggest news today will be whether lawmakers can come through with a fiscal stimulus bill. Play close attention to the tape, as it will hear about a potential deal before the news wires.

Best part of the report comes from those dirty fingernail jobs which absolutely boomed last month.   For what’s it worth if these numbers are echoed in the BLS report it will impact the election more than any debate.

Let's not force the issue this morning.